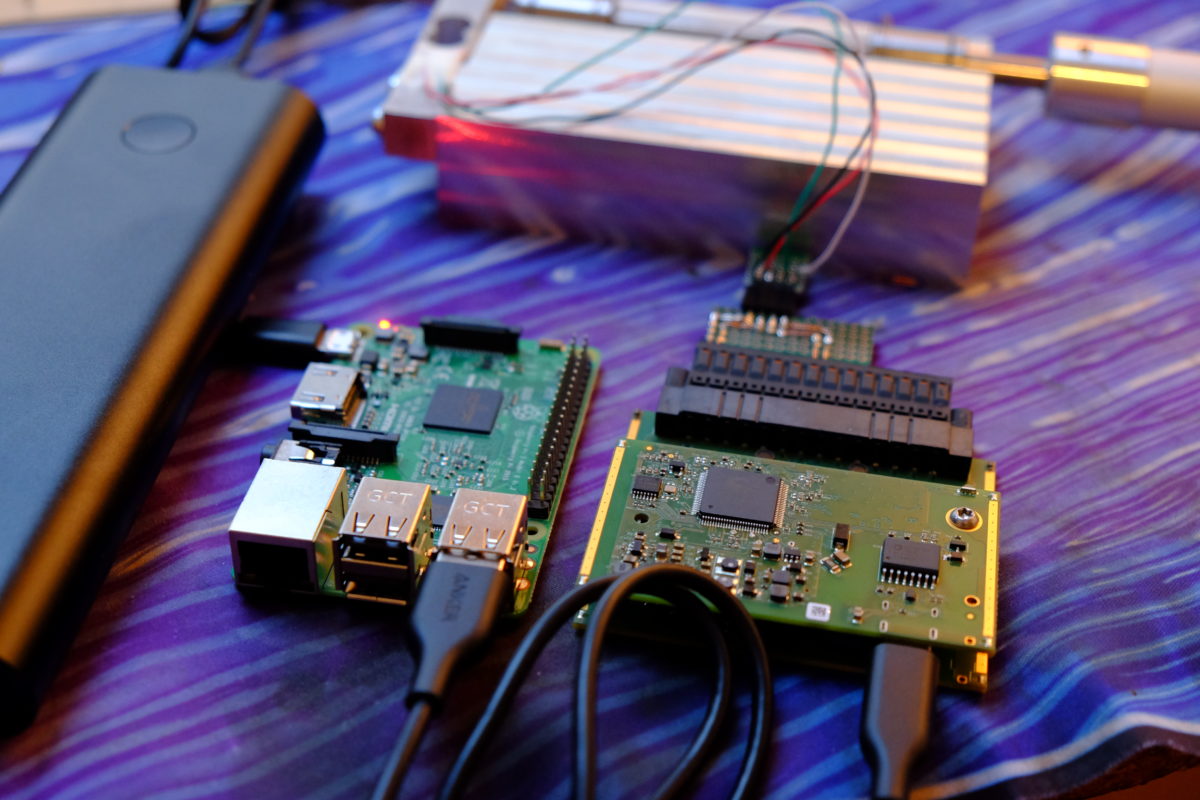 Python is one of the most popular programming languages and for good reason, it is incredibly versatile and a very powerful tool for data processing. Let’s take a look at how to use python running on a Raspberry Pi to receive and process data from the MonoDAQ U-X.

Before starting with python make sure you have completed the first part of this tutorial. IDM software must have been installed and the U-X detected by it. While the tutorial focuses on python running on the Raspberry Pi most information here can also be applied to python running on other machines.

Before we start writing code

Before we can start writing python code we need to install a few plugins. The is straight forward and can be accomplished with a single command. Open up the terminal and run:

Make sure that you are installing the plugins on python 3.x since some won’t work with python 2.x

It will take a couple of minutes to complete since we are installing quite a few modules but eventually you should get a message that everything has been installed.

We will be using the IDLE development enviroment since it comes preinstalled with Raspbian. Start IDLE and open a new document.

First, we will import the required modules which we have downloaded previously.

To makes things easier we shorten .MonoDAQ_U() to since we will use it often in our code.

It is advisable to use the reset command to start channel setup.

To configure the channels use the following notation:

Just like in the first part of this guide series we will be measuring temperature with a thermocouple. We want to configure the first channel to be a thermocouple input so the command looks like:

Keep in mind that pins on the U-X start with 1 but counting in IDM starts at 0 so to set the function of the first U-X pin we need to set the value of function0 and not function1!

The easiest way to figure out what exactly should go in the square brackets is having the parameter tree open and following the structure.

For example, let’s say we wanted to set channel 3 to be a PWM output with a 1000Hz frequency. We have already shown how to change the function of a channel. To figure out how to change the rate we need to take a look at where rate2 is located in the parameters tree.

Following the structure of the tree (ignoring the first var folder) we can see that the command to change the rate will be:

The same logic applies for changing all other chanel parameters.

Before starting measuring we need to make sure the U-X has self-calibrated so we use:

We can check if everything has been set up as we wanted by printing the setup with:

To obtain the measured values from the channels we use the mdu.fetch(‘Number of samples’) command. For example, to collect 100 samples:

The fetch command will wait until the desired number of samples have been taken and then return them all at the same time.

To convert the data into a convenient form we use the signal2stream command. This command creates a dictionary from the fetched data and also can be used for logging which we will explore later.

In reality, we are greatly simplifying things. Fetch and stream2signal methods are actually generators. Also, the fetch command provides us with additional information besides just the measured values like voltage or temperature.

In order to keep this guide short and easy to follow will spare you the gory details. But if you want to know what’s really going on here head over to Isotel’s page which contains more detailed information.

For now all you need to know is that a simple way to obtain a dictionary containing measured data is by using:

This might seem a bit confusing if you are used to for loops well… looping. But as a consequence of working with generators, the above code does not actually loop. It just runs once and is not constantly overwriting as you might have expected.

If we print you can see that it is now stored as a dictionary. In fact, it is a nested dictionary!

You can figure out what exactly to insert in place of ‘Channel’ by looking at the channel setup in IDM and combining the pin and unit into a single string. The unit should be put square brackets and from pin name by a single space.

Alternatively, just print the entire (print(data)) and read what the keys are. ‘Axis’ should just be ‘y’ for whatever you are measuring (e.g. temperature) or ‘x’ for of measurement.

For example, in order to obtain (or in this case print) a list of temperatures, we would use:

So let’s put all of what we learned together and write a simple program which will record a thermocouple input for 5 seconds at 100Hz. Afterward, it will extract the necessary data to draw a of temperature with respect to time.

When the program notifies us that the measurement has begun we heated up the thermocouple with a lighter. This is the result:

In this we just plotted the data but once you have converted it a dictionary the possibilities are endless. You can even export it as a .csv import it X3 on another machine and do further analysis there.

Having to provide how many samples should be taken in advance is often not very practical. Also, being able to see the measured values in real-time would be handy. So let’s take a look at how we can accomplish both.

Well by adding a split parameter to the stream2signal we can make it send out smaller chunks of data which we can use for real-time monitoring. sure that fetch won’t run out of data by giving it a very large number of samples to acquire. For example:

Unlike in the previous example, this time the for loop acts like we would expect it to. Assuming the sample rate is set at 100Hz the code in the loop will run once per second with some_data being a dictionary containing the last 100 samples.

We could add some_data to a list containing all of the measurements for storage or later analysis. But we could also use some_data to display current values of measured variables or even plot it in real-time.

Since fetch has been given a high value the measurement will be going on for a long time. In order to stop it we use the atexit module

allows us to stop the measurement at any time by pressing ctrl+c. After ctrl+c is pressed code in goodbye() runs and the program closes.

Below is an example program you can test out. Like the first program, the channels have been set up to measure a thermocouple input at 100Hz. But unlike before the user can see the current temperature which is being updated once per second and they can stop the measurement at any time by pressing ctrl+c. When the user stops the measurement the plots are drawn.

To give you some inspiration here is a use case where this sort of setup comes in very handy.

In amateur rocketry, a high-performance rocket motor is the most important part of the rocket. The key performance parameters being thrust, total impulse and motor efficiency. Advanced ‘hobbyists’ make their own rocket motors but often don’t have a good way of measuring the motor’s performance.

This is where the U-X and RPi combination comes in. Generally speaking, standing next to a burning rocket motor is not a terrific idea. The operator would ideally like to get some distance between them and the potentially explosive rocket motor.

So here is the set up:

The U-X and the RPi are connected just like we discussed in this guide. A simple thrust measuring rig based on a load cell is constructed and connected to the U-X. Everything is powered with a USB power bank making the system very portable.

Thrust force is measured with the U-X and being sent over to RPi. RPi is running python code which is storing the data as a .csv file. The RPi and the operator’s laptop are connected to a hotspot. Data logging is initiated from the laptop. After the motor test, the .csv is sent over the network to the laptop where it can be analyzed using Dewesoft’s X3 software.

From the trust data, the total impulse can be calculated. Weighing the motor before and after the test allows the motor efficiency to be calculated providing all of the necessary information. The sample rate is even high enough that any combustion instability will show up in the data which is of great help when optimizing the motor design.

All this allows the operator and their PC to be a safe distance away from the motor when the test is while still obtaining all of the neceserr data. The U-X and RPi combination is even small enough to be mounted in an actual rocket which could enable measurements.

We have covered all the basics you need to know to get data flying from the U-X to your python program. This opens up infinite possibilities in what you can do and gives you tremendous power. Use it wisely!